At Canterbury School, we're artists, athletes, and scholars who have strong connections to each other and our community.

Since 1977, Canterbury School has offered exceptional college-preparatory experiences for artists, athletes, and scholars. Each student learns to think outside of the box so he or she can problem solve, analyze, ask questions, answer questions, and make meaningful connections. And, our close-knit community of dedicated teachers and supportive families enable our students to flourish.

The threads of our connections are strong, varied, unique, and beautiful, forming a pattern that’s clear and that extends always in new directions. Canterbury is continually adding to this rich tapestry of challenges, ideas, inspiration, and potential. How can we connect with you?

The mission of Canterbury School is to maximize the potential of young people by providing a challenging, enriching, and supportive learning environment in which students build the foundation for a life of purpose, passion, and meaning.

While the structure of Canterbury has changed since 1977, the school remains committed to the four founding pillars of intellectual, physical, social, and spiritual development. To that end, Canterbury has created an educational experience founded on the following set of core beliefs:

In 1976, our story began with a shared goal among dedicated group of parents: to find or create an educational program that would better challenge their children.

Their first inquiries, beginning with the Episcopal Church and gaining momentum with the National Association of Independent Schools, led them to articulate a vision for a school that would inspire and motivate students while instilling Christian values and morals, cultivating an appreciation for the fine arts, developing foreign language skills, and setting high standards for teaching and learning.

Today, the founding family names are the foundation for the High School House Program: Cast, Paflas, Parrott, Randall, Smith and Spindler, and the Posther Cup. And, the school enrollment is approximately 950 students, with average class sizes between 16 and 18 students, and 130 full- and part-time faculty and administrators.

Canterbury actively seeks to enroll students who will take advantage of all that our unique educational community offers. Our experience tells us that students who succeed at Canterbury have the following characteristics:

To these students, we commit to providing:

Our commitment to a transformative educational experience is reflected in the vision we hold for our graduates.

We believe our school community and its members are enriched by understanding and respecting the uniqueness in all people.

Because of this, we actively seek to create an inclusive environment that emphasizes the importance of embracing our differences. We believe all voices in our community should be valued, appreciated and respected. We are committed to embracing differences in race, religion, ethnicity, national origin, gender, sexual orientation, and socio-economic status, and to affirming the dignity and worth of every individual. We will support policies, programs and practices that promote the diversity of the world in which we live, that create an inclusive and evolving environment in which to teach and accept these differences, and that are consistent with our school’s mission.

Canterbury School admits students without regard to race, color, religion, national origin, gender, sexual orientation, or any other characteristic. It does not discriminate in the administration of its educational policies, financial aid programs, hiring practices and other school administered programs. 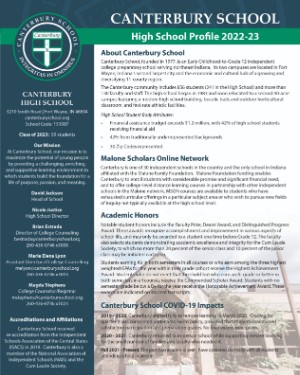 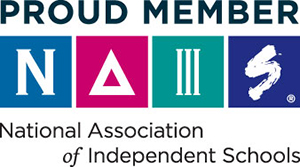