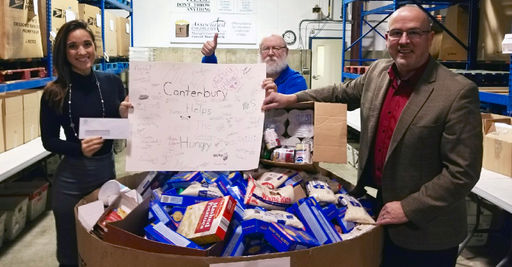 Canterbury Helps the Hungry in a Big Way this Year
Jessica Morales, Director of Enrollment Management
January 16, 2019 11:32 AM

This fall, Canterbury School's 5K Family Fun Run and the November Food Drive raised $2,000 and nearly 7,000 pounds of food in support of the Associated Churches Network of Fort Wayne. Associated Churches announced that the donation will support their efforts through this spring, remaining the largest donation for the organization in 2018.

"The Food Bank budget is always stressed because we buy $8,000 of food product every month to supplement the in-kind food product," said Roger Reece, Executive Pastor at Associated Churches. "Canterbury's donation will be added to the budget to help purchase more food for families in Allen County."

Roger continued, "There continues to be a significant need for services for families in our community. Those living above the poverty level continue to struggle despite what has been described in the media that prosperity is at an all-time high. We are continuing to experience greater need for all our programs. We so appreciate the partnership with Canterbury School. They are such a blessing to this community on so many levels. They are always thinking of and caring for those in need."

"The event was a huge success for everyone involved." said Jessica. "Although it's a race to the finish - literally - there are never any losers when all the funding supports a phenomenal organization like Associated Churches."

Following the 5K race, Canterbury hosts the annual all-school food drive in November. The food drive, directed by Lower School Librarian, Anita Bates, and assisted by Middle School Math Teacher, Marlynn Hammond, collects food items across each division from students, faculty, parents, and community members. This year, nearly 7,000 pounds of food items were collected, and the timing couldn't be more perfect with Thanksgiving having been right around the corner.

Anita has been involved with the food drive for more than 20 years. "As a parent, I can't imagine not having enough food to feed my family or having to make the decision to pay for heat, or medicine or food." Anita went on to explain that many years ago, a Canterbury parent donated a great amount of food year after year, and it was not until later that Anita discovered why this parent was insistent on giving so much to the food drive each year.

"When this parent was a child, her family often didn't have money for food and would go hungry," explained Anita. "She told herself that when she grew up, she would do what she could to help others that were hungry. That is one of many reasons why the food drive is important to me."

According to Associated Churches, throughout the last ten years, Canterbury School has contributed more than 200,000 pounds of food to the organization.

"It's really inspiring to see our young students walking through the front doors in the morning excitedly carrying all the items into school to support such an awesome cause," said Marlynn. "But even more inspiring, is the fact that an incredible number of our students and staff also give up a great deal of their free time during the week of the food drive to help us stack and box the food and load the truck. It helps build school spirit as we work as a team to make it happen every year."

Hammond said part the school's mission is to help our students build a foundation for a life of purpose. "Community connecting events like this help our students to reach outside of themselves and walk in someone else's shoes," she said.

Canterbury shares Marlynn's sentiment that by engaging our students' heads and hearts, we help them make better decisions about things that affect the people around them.
Powered by Finalsite